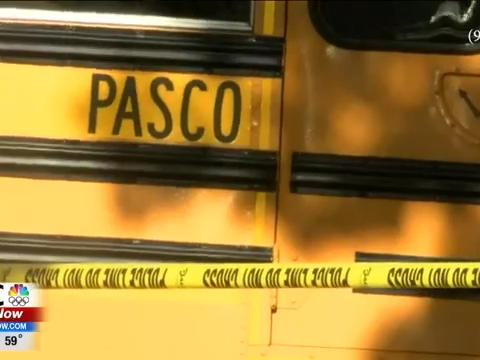 PASCO, WA – In a press conference today, the Pasco Police Department shared the details of how Richard Lenhart, 72, was stabbed by Joshua Dian Davis, 34, on Friday, September 24, 2021 at around 3pm.

Lenhart opened the bus doors and proceeded to ask Davis if he needed anything to which Davis stopped into the bus (empty-handed) and asked if the bus was going to Road 100. Pasco Police say that because it was an active street with several witnesses around in the middle of the afternoon, Lenhart’s action to open the door and see what Davis wanted would not be considered risky action.

Lenhart replied no to Davis’s question, to which Davis turned around as if to walk away but then turned back around revealing his knife and suddenly started stabbing and attacking Lenhart who was still belted into his seat. The attack caused Lenhart’s foot to come off the brake which caused the bus to roll forward and jerk on top of the sidewalk stopping into the bushes and trees in front.

All 35 children witnessed the assaults. None were physically hurt and all immediately were escorted off the bus and had their parents called.

“It comforts the community knowing that Lenhart knew the children were safe before he succumbed to his injuries,” said Pasco Police Chief Ken Roske.

As the bus crashed, Davis jumped out of the moving bus and fled toward his vehicle. Pasco police say “the suspect did not need transportation to Road 100. Davis had driven to the scene in a private vehicle, had parked nearby, and approached the area of the school on foot.”

The stabbing occurred after school around a few minutes after 3pm. Police were on scene at around 3:09pm.

After the stabbing, Davis returned to the scene in view of the officers. They arrested him without incident holding him for murder in the first degree.

The suspect’s vehicle was recovered and impounded for a search warrant and police also recovered the knife.

At this time, police do not know the motive behind this attack or if Joshua Davis knew Lenhart.

Davis does not have a criminal record but has had some previous contact with law enforcement, particularly in 2019 when he had been referred to be transported to a medical facility after a Pasco police officer checked on his welfare. Davis was a Richland resident and was not homeless.

“I want the public to know that there are several things we do not know about this case and things we may never know.” said Roske.

At the site of the bus crash, there are now flowers and pictures to honor Lenhart.

The Franklin County Prosecutor is reviewing this case.

If anyone has any information, please contact Pasco police at Dispatch calling (509)628-0333 or email Detective Julie Lee at [email protected] The case number is 21-28540 Homicide.

This is a developing story, which means information could change. We are working to report timely and accurate information as we get it.